Good-Bye to an Amazing Man, Both War Hero & Gentle Giant 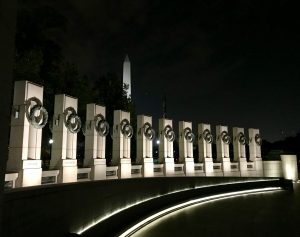 RIP Bill Tippins, an honored World War II veteran who survived a severe shrapnel wound to the gut, a three-mile walk to the nearest field hospital, three prisoner of war camps, and various attempts to escape from those camps before landing at a U.S. Army camp in northern France at the end of the war.

After the war, he went back to Germany on a needle-in-a-haystack search for a woman with rosy cheeks (aka Pinky). And he found her! Pinky had given Bill extra rations of food while he recovered from the shrapnel wound. Bound forever by a brief spate of time defined by the war, a shrapnel wound and contraband pieces of bread, the two of them would get married, raise three children, and spend the rest of their lives in northern Virginia.

I met Bill decades later. He was nearly 90 at the time, and I marveled not only at his amazing story, but also at the ever-present twinkle in his eyes, the friendly witticisms on the tip of his tongue, and his determination to be as vibrant and as adventurous as possible. In his later years, that meant periodic, ill-advised, him-behind-the-wheel trips to the Base Exchange at Fort Belvoir.

Eventually, a block-long walk to the mailboxes in his condo complex would become a challenge, but he never stopped striving. He never lost his sense of humor. And he never ever lost that twinkle in his eyes.