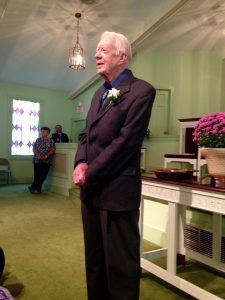 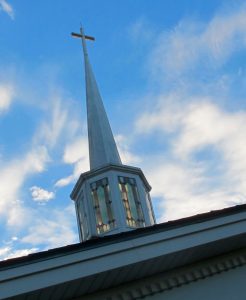 “Good morning,” Carter said once and then again to elicit a more enthusiastic response from an audience both awed and unsure of exactly how boisterous to be. As he walked back and forth in front of the pulpit, Carter asked us where we were from, called on a visiting pastor to lead us in prayer, and began the lesson for the day, one called “Giving the Tithe.”

The 92-year-old former Commander in Chief looked sure-footed and healthy as he told us about the Old Testament account of Abraham, how he returned home after defeating the King of Elam and gave 10 percent of the spoils to Melchizedek, a priest and King of Salem, and how that gesture set a precedent for tithing that endured for centuries to come. Tithing is not obsolete today, but it exists on a much smaller scale. The concept, however, of giving back was the message Carter wanted to convey.

“What do we owe to God?” he said, making it clear that he wasn’t talking about material or monetary possessions and reminding us that Jesus had nothing — no house, no savings, and when he died, no friends. Yet “he lived the perfect life.”

Carter then talked about the gifts we receive from God. He mentioned the good (freedom, talents, happiness, joy), the not so good (challenges, uncertainty), the in-between (a life of unpredictability), and life itself.

In the end, he said, it’s irrelevant whether one becomes a farmer or a lawyer (or presumably a president). “The more important question than what am I going to be,” he said, “is what kind of person do I want to be? 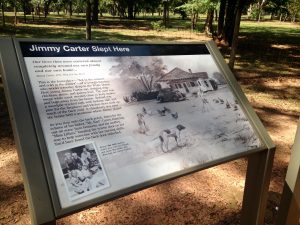 To illustrate his point, Carter talked about Millard Fuller, the founder of Habitat for Humanity. Fuller was a self-made millionaire who at the age of 29 decided, along with his wife, to donate their wealth to various causes and dedicate their lives to missionary work and helping the poor.

“That stretches our consciousness, doesn’t it?” Carter said, not because Fuller had millions to give but because he gave away everything he had.

“We’re supposed to give our whole life – our talents, our abilities, everything dedicated to carrying out the mandate, the command, or the example set by Jesus Christ,” Carter said. “He didn’t just give 10 percent of his time, did he?”

And that right there was the essence of Carter’s Sunday school message.

It came at the end of an eight-hour drive from Raleigh, an overnight stay in neighboring Americus, and a four-hour check-in process at the Maranatha Baptist Church, but it was well worth the effort to be reminded that living is about giving life everything we have, not just 10 percent.