“Digging in the Dirt” 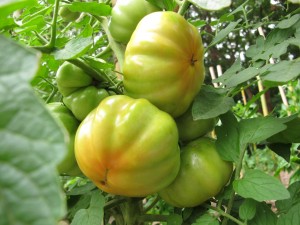 On a patch of land about two blocks west of the University of North Carolina campus, people from disparate parts of UNC and the larger Chapel Hill community come together in pursuit of a common goal — to till the soil, plant seeds, pull weeds, and harvest a vast array of fruits and vegetables.

The produce is then donated to the university’s low-wage workers, the people who make sure that from the Dean Dome to Franklin Street, the floors are scrubbed, the bathrooms are clean, and the trash is thrown out.

This 14,000-square-foot piece of land tucked away at the end of Wilson Street is known as the Carolina Campus Community Garden, or CCCG. The first seeds were planted in the spring of 2010, and ever since a small army of volunteers have helped it grow into a thriving agricultural space that has produced more than 24,000 pounds of fruits and vegetables worth $121,000.

The volunteers, who refer to the tasks involved in planting and harvesting the produce as “digging in the dirt,” tend to be dedicated and passionate about what they do.

“What really hooked me originally,” said recent UNC graduate John Powers, “was being able to get out here and do something completely different from classes and develop skills that I didn’t have before.”

Powers, who initiated a compost collection program in his dorm and served on the garden’s advisory board, said his work with the garden helped him develop valuable communication and leadership skills and introduced him to a close-knit group of friends. 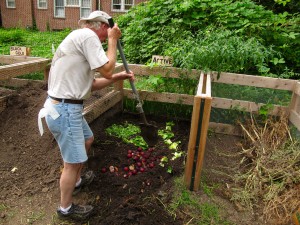 One of those friends is Tait Chandler, also a recent graduate and a driving force behind a $15,000 construction grant the garden received from the Renewable Energy Special Projects Committee, a UNC student organization that supports eco-friendly construction projects.

The garden, he said, made him realize “how nice it is to get outside and do meaningful work that doesn’t involve paperwork.”

Powers and Chandler are among the many who year after year have helped the garden grow. Others include UNC faculty and staff, residents of Raleigh, Durham, and Chapel Hill, and a long list of donors, who have contributed everything from seeds to architectural expertise.

“It’s amazing how many people offer their services,” said Claire Lorch, the garden’s Education Coordinator. “They find out what we’re doing and are supportive, so they want to come help.”

As education coordinator, she’s in charge of pretty much everything that takes place on this busy patch of land. She oversees the work of the volunteers, grant writing, fund raising, and expansion projects as well as the ever important food distributions, which cater to a diverse group of people comprised largely of refugees from Burma, Hispanics, African Americans, and whites. 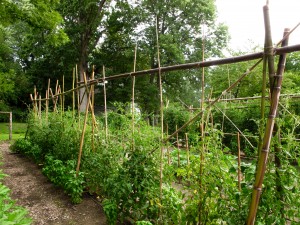 Tomatoes on the vine

Timothy Carville, a zone manager with the university’s housekeeping services department, provides workers with the transportation and time they need to take a break, stand in line, and pick up their supply of fresh vegetables, and he does so very willingly. The food distributions, he said, have begun to break down racial and ethnic barriers and are a boost to morale.

“Before the distributions, they didn’t speak to each other,” he said, referring to the different racial and ethnic groups. Now, they not only talk to each other but also swap recipes.

“I’m not saying it’s solved the race problem in America,” he said, but “they’ve bridged the gap.”