The F Street underpass: Where the twain do meet 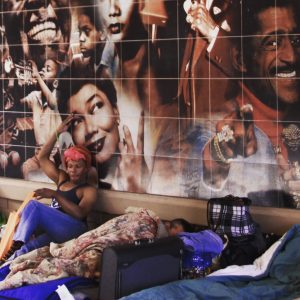 It was about a year ago today on a trip out West when I first learned about the F Street underpass, a little known but pivotal gateway in the city of Las Vegas. It connects an area known as West Las Vegas to the city’s downtown. West Las Vegas is a historically black neighborhood where restaurants, nightclubs and casinos once thrived. Ironically, desegregation policies would precipitate its decline. As affluent African Americans left West Las Vegas, their former neighborhood lost its economic base, leaving room for both gang wars and urban blight to flourish. Revitalization efforts include a new park adjacent to the F Street underpass as well as beautifully crafted, tiled renditions of African American leaders in the underpass itself. What proponents of the revamped underpass failed to take into account, however, is its close proximity to the city’s homeless corridor, which led to another ironic twist. The F Street underpass has become an alluring way station for several of the roughly 6,500 homeless people who call the streets of Las Vegas home. #lasvegas#homelessness #FStreetunderpass #travelohotography #travelblogger