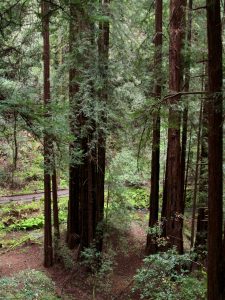 The following day I swapped towering redwoods for towering buildings in San Francisco and a walk along the Embarcadero Historic District, where 47 piers extend from a concrete seawall alongside the San Francisco Bay. I started out at the Ferry Building Marketplace, where I had a delicious mushroom empanada at El Porteño, fed a few crumbs to birds milling about outside; and thumbed through many of the tempting-to-buy new releases on display at the Book Passage bookstore. 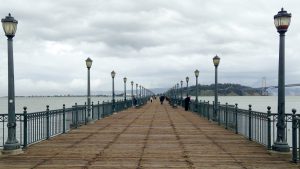 The Ferry Building is the dividing line between even and odd numbered piers. The industrial, even numbered piers extend south. The odd numbers extend north leading up to the bars, restaurants, shops, museums, boating excursions, and other amusements at Pier 39 and Fisherman’s Wharf. I went north, marveling at how each pier along the way has a distinct focus — e.g., office space, restaurants, museum, etc. My favorite was Pier 7. A so-called “simple finger” pier made with timber decking and iron railings, it’s beautiful in its simplicity.

Also beautiful in their simplicity were the many roadside vistas on my daylong trek back to Vegas, which began with a drive along Monterey Bay and ended with a full moon illuminating wide open desert skies in eastern California and Nevada. My first stop was the Salinas River State Beach, a narrow strip of land wedged between the its namesake River and the bay. Due to dangerous currents, the beach is used mo

re for walking and horseback riding than swimming and surfing, and the day I was there, the river was much more lively than the bay. Two otters entertained those of us on the riverbank by diving for fish, surfacing to eat their catch, and after “brunch,” taking a bath followed by a floating nap.

From the park I drove east to Salinas then south through miles of geometric tapestries created by rows of grape vines and budding heads of lettuce before reaching a fork in the road. One way would take me to Las Vegas through Los Angeles County; the other would cut across the state to Bakersfield.

I chose Bakersfield and am very glad I did. The scenery along State Road 166 is stunning. It winds through the rolling hills and jagged cliffs of the Cayuma River Canyon before plateauing into vast fields of citrus trees in the San Joaquin Valley.

About an hour the other side of Bakersfield is when the sun went down and that big old moon took center stage, allowing for an amazing view, even in the desert in the dark of night, and bringing to mind this gem from Divine Sisters of the Ya Ya Sisterhood: “[A] summer moon will put up with inattention for just so long.”