Gettysburg, then and now 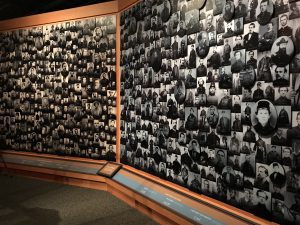 The names and faces of war casualties take up two walls of the Gettysburg exhibit and still represent a small fraction of those who died during three days of fighting in early July 1863. The death toll reached 11,000. There were another 40,000 casualties — wounded, captured or missing.

A visit last week to the Civil War battleground museum in Gettysburg served as a reminder of how far we’ve come in the past 153 years and, jarringly, how far we still have to go.

As one museum plaque says, “Americans fought one another over three fundamental issues: the survival of the Union, the fate of slavery, and the common rights of citizenship — what it means to be American. The war resolved the first two issues. The nation struggles with the third to this day.”

Another plaque notes that people living in the United States in the mid- to late 1800s “included new immigrants, American Indians, slaves, free blacks – men, women, and children. But with a few exceptions, only white males over 21 enjoyed all the rights of citizenships, including the right to vote.”

Sadly, not only do efforts to impose voting restrictions prevail, but so does the inhumane treatment of those living within the nation’s borders, including the most recent iteration of a relentless crackdown on immigrant communities — the recent separation of nearly 2,000 immigrant children from their parents at the U.S.-Mexican border, a practice condemned by the American Academy of Pediatrics for causing “irreparable harm.” 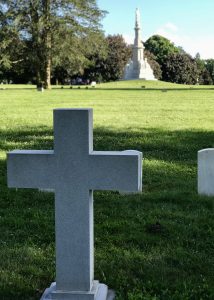 “Four score and seven years ago, our fathers brought forth on this continent, a new nation, conceived in Liberty, and dedicated to the proposition that all men are created equal.”

So begins the Gettysburg Address, a speech of a mere 272 words that Abraham Lincoln gave at a memorial service for the thousands who perished on 9.3 square miles of land in and around Gettysburg, PA.

At the time, the Gettysburg Address received mixed reviews. Some gave it high praise. “His little speech is a perfect gem; deep in feeling, compact in thought and expression, and tasteful and elegant in every word and comma,” said the Republican, published in Springfield, Massachusetts.

Others did not. “The ceremony was rendered ludicrous by some of the sallies of that poor President Lincoln. Anything more dull and commonplace it would not be easy to produce,” said the London Times.

The photo above depicts a distant view of the monument marking the place where Lincoln spoke. The monument is surrounded by low lying cement markers for the deceased. Today, visitors honor the site by placing pennies — heads up — on the monument and nearby tombstones. 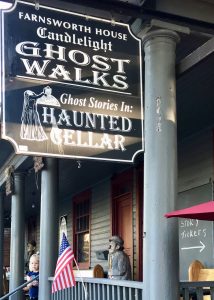 As one might expect, ghost tours abound in Gettysburg. Asked about the possibility of encountering ghoulish specters in and around town, a park ranger rolled his eyes. “I’ve been on the battlefield all hours of the night and day, and I’ve never seen a ghost,” he said. But the tours, he added, offer up insights into what happened in the days leading up to, during, and after the single most pivotal and bloody battle in the Civil War.
Abraham Lincoln, Gettysburg Address, Gettysburg National Military Park, immigration, slavery, voting rights
Meanderings
Posted on June 17, 2018