For years now, I’ve been going up and down stretches of interstates 95 and 85 that connect the Raleigh-Durham-Chapel Hill area, where I went to college and now live, to Richmond, VA, where I grew up. During a recent trip in early March, I veered off the beaten path and decided to take Route 1 instead. Much to 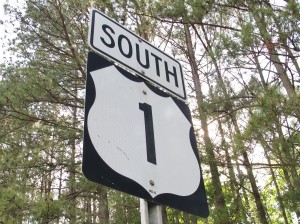 my surprise, the journey turned into a time warp just south of Petersburg. A saddled-up horse stood among the cars and trucks parked in front of a convenience store as if the rider had stepped inside for a shot of whiskey and a game of poker. As I continued south, I went for miles at a time without seeing another car on the road, making for an oddly serene trip that was almost devoid of whooshing cars, rumbling trucks, and garish billboards. The roadside scenery consisted largely of brown, fallow fields and quasi-dilapidated buildings in desperate need of repair. The time warp lasted for about 60 miles until I reached South Hill, and while I assume that springtime growth has improved the view, I’m quite sure it hasn’t altered the sense that time must’ve stood still along this particular stretch of road shortly after 1956 when President Eisenhower signed the law creating the interstate highway system.