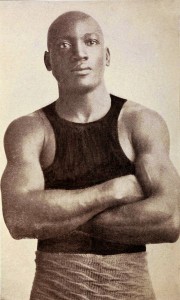 Unwilling to accept a black man as the world’s greatest prizefighter, boxing enthusiasts convinced former heavyweight champion Jim Jeffries, aka the “Great White Hope,” to come out of retirement and fight against Johnson. The duel took place on July 4, 1910, in Reno, Nevada, and once again, Johnson was the decisive winner.

While Johnson’s victory was a major triumph for African Americans and a major defeat for white supremacy, it also sparked deadly race riots and led to a concerted effort to knock him out, so to speak, in an arena where his boxing skills and bravado were of little use — the courtroom.

In 1912, Johnson was charged and convicted of violating the Mann Act, which prohibited the transportation of women across state lines for “amoral purposes.” Upon his conviction, Johnson fled the country, returning eight years later to serve a year-long sentence. Ultimately living to the age of 68, Johnson continued to fight into his 60s but never regained the acclaim he once had.

As Andrews noted, Johnson was able to make great strides in the world of boxing by winning individual battles inside the ring, but he couldn’t beat “all white men” when they banded together and took the fight outside the ring.

In the past several years, Johnson’s legacy has been revived by filmmaker Burns and others, including bipartisan lawmakers, who feel the former heavyweight champion deserves to be recognized for what he achieved. They have repeatedly petitioned for a presidential pardon, initially asking George W. Bush and more recently Barack Obama.

So far, Andrews noted, the petitions have been ignored.